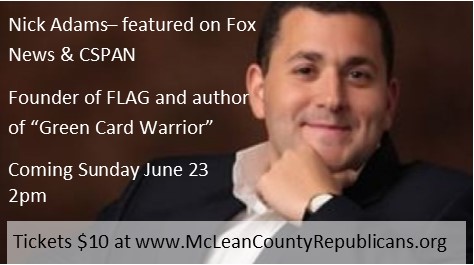 Nick Adams is an Australian best-selling author, speaker and political commentator, and the Founder and Executive Director of FLAG (The Foundation for Liberty and American Greatness). He is best known for his work in the field of American exceptionalism, and is credited with a resurgence in the idea worldwide. He is a regular on Fox News, C-SPAN and nationally-syndicated radio. Adams has received several state awards, being appointed an Honorary Texan by Governor Rick Perry in 2013. He is the author of the book: Retaking America: Crushing Political Correctness (2016)

Purchase tickets on line or if you make a reservation you can pay at the door.